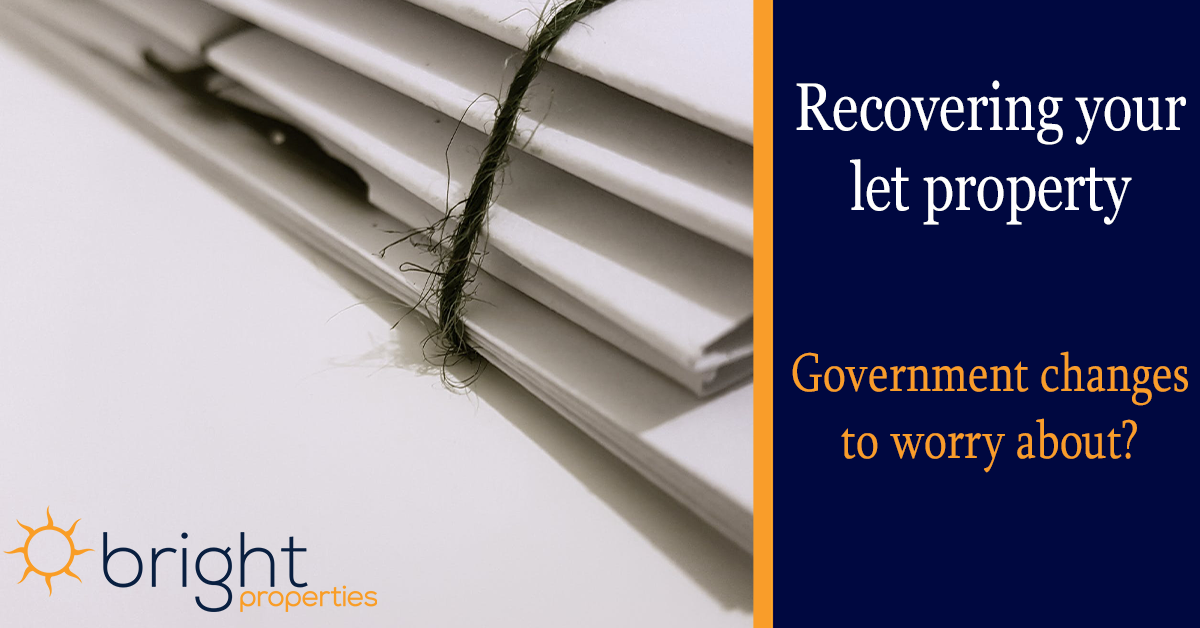 Recovering your let property: government changes to worry about?

Since 1988, the law has been on the side of landlords when it comes to recovering possession of your let property. Section 21 of the Housing Act enables you to recover the property without giving a reason to your tenant, after a fixed-term tenancy has ended or during a periodic tenancy. Tenants must be given at least eight weeks’ notice under Section 21, and those on a periodic tenancy must be given any additional time that may be covered by their final rent payment, too.

A notice is often used by landlords to recover a property either to allow them to sell the home or to move into it, though it is also used in situations where a tenant has not complied with the tenancy agreement while living in the property. These are entirely legitimate reasons, but there has been growing concern that landlords are using the provisions when they have not themselves complied with letting laws. This has led to the need to prove, for example, that the tenant has been given the EPC, the gas safety certificate for the property and the Government’s ‘How to Rent’ booklet (setting out tenants’ rights) before a tenancy starts if a landlord wants to rely on Section 21. There has also been concern that notices or the threat of them are being used unfairly, for instance to discourage a tenant from complaining about poor housing conditions. It has also led to courts often being reluctant to enforce Section 21 notices against tenants, leading to costly delay.

These concerns have led to a proposal to repeal Section 21 to end unfair evictions – preventing private landlords from evicting tenants at short notice and without good reason. It also anticipates a step-change to create open-ended tenancies for all private renters.  https://www.gov.uk/government/news/government-announces-end-to-unfair-evictions

If this happens, can landlords be sure they can recover their property? There are a parallel set of rules for recovering a property. These can only be used where particular facts are proved by the landlord. It was the inflexibility of these and the unhelpful approach of the courts that led to Section 21 being introduced so these alone are insufficient. The government is aware of this. Its self-styled “new deal for renters” will ensure landlords will have more effective means of getting their property back when they genuinely need to do so. As ever, the devil is in the details. These will only emerge after a consultation process, yet to be started. The eventual proposals will need to pass through Parliament. There is every reason to believe that a new balance of landlord and tenant rights will emerge that is adequate for landlords to have confidence they can recover a property in appropriate circumstances but this requires that landlords, agents and representative bodies maintain an active voice in the debate.

Groups representing landlords and letting agents have formed a ‘Fair Possessions Coalition’. Their message to the government is that landlords much prefer to have good tenants staying long term in their properties, but they need certainty that in legitimate circumstances, such as tenant rent arrears or anti-social behaviour, they can swiftly and easily repossess their properties in much the same way as social landlords and mortgage lenders.

Instead of tinkering with the system, the Coalition calls for a comprehensive overhaul of the regulations and processes enabling landlords to repossess their properties. It should lay out clear grounds for repossession that are unable to be exploited by rogue landlords or unreliable tenants. Linked to the reform should be the establishment of a new, dedicated, fully funded housing court. This should make better use of mediation taking into account models in use abroad and meet in local venues such as schools and community centres, making the process less intimidating and easier for landlords and tenants to obtain the swift and accessible justice they need if the relationship is to work effectively.

We support this approach and will be making our voice heard in the debate.